The first thing to establish is what a compressor of any form actually does, and the answer is that it reduces the dynamic range of the input signal. Whether it’s configured to make the loud bits quieter, or the quiet bits louder, fundamentally it exists to reduce the overall dynamic range from something large and unmanageable to something smaller and more appropriate for the intended application.

The vast majority of compressors apply ‘downward compression’ which means, in essence, that loud stuff is made quieter. More specifically, signals below the threshold level are left alone, while those above are ‘squashed’ by an amount determined by the ratio setting.

The more conventional way of illustrating compression is with a ‘transfer plot’, which is a graph with the input level on the horizontal axis and the output level on the vertical axis. The graph in Figure 2 was obtained by measuring the amplitude response of a ‘hard-knee’ compressor plug-in in a DAW, using an Audio Precision test system. The dotted straight red line at 45 degrees shows the response with the compressor bypassed — clearly illustrating that what goes in comes out, unchanged in level!

The different coloured solid lines were obtained with the compressor switched in and the threshold set to -20dBFS. The light-blue line is the result of a 2:1 ratio, and it clearly shows that when the input is 10dB above the threshold (ie. a ‘Generator Level’ of -10dBFS on the horizontal axis), the output or ‘Measured Level’ on the vertical axis is at -15dBFS, which is 5dB above the threshold. In other words a rise of 10dB at the input results in a rise of only 5dB at the output — which is half as much, and hence a compression ratio of 2:1.

The other traces show progressively ‘stiffer’ ratios, of 3:1, 5:1, 10:1, and 40:1. Anything above 20:1 is generally referred to as ‘limiting’ because the output level barely rises regardless of how much the input level exceeds the threshold.

Incidentally, a ‘hard-knee’ compressor, like the one used for these measurements, switches abruptly from doing nothing to squashing the audio, and that is revealed by the very distinct change of angle on the transfer curves. A ‘soft-knee’ compressor moves more gently from inaction to action, so its transfer plots would curve smoothly away from the 45 degree linear slope instead of diverting abruptly.

Now let’s imagine a musical signal where the quietest element measures -35dBFS and the loudest is -5dBFS, so that we have a starting dynamic range of 30dB. If we were to pass that signal through a 2:1 compressor with a threshold at -20dBFS, the output signal will range between -35dBFS (this level is below the threshold and thus unchanged) and -12.5dBFS. The latter figure arises because the source peak level (at -5dBFS) is 15dB above the threshold, and thus will be reduced by half to 7.5dB above the -20dBFS threshold, which is -12.5dBFS).

Useful though this form of compression is, often we want to reduce the dynamic range without reducing the peak level. In other words, we want to raise the level of quieter signal components rather than turn down the loud ones. The usual way to achieve this is to introduce ‘make-up gain’ at the output of the compressor. A good way of understanding the concept is to return to the ladder diagram.

I prefer to call this ‘uplift compression’ to avoid confusion with true ‘upwards compression’ (which I’ll come back to in a moment). As the lowest ladder diagram in Figure 1 shows, the input signal is first downwardly compressed in the usual way, but then the output is raised in level by a fixed amount of ‘make-up gain’. The overall result is that the dynamic range has been reduced, again, but this time the peak level is restored to the same as the input while lower-level signals have been raised — so the quiet bits have been made louder.

However, this diagram reveals clearly that it is still the louder elements that have been ‘squashed’ — the quieter signals have simply been raised in level. That’s the key difference between ‘uplift compression’ and ‘upwards compression’. By the latter term, I mean processing that squashes the quieter elements while leaving the loud bits alone, as the final diagram in Figure 1 illustrates.

Normal downward compression — whether it’s used on its own or with make-up gain — inherently changes the character of loud signals to some extent by squashing them. Rule number one for any downward compressor is to squash anything loud! However, the action of turning the level down (and back up again afterwards) isn’t instantaneous; it takes place over a timescale that is governed by the compressor’s attack and release time constants. The inevitable result is that the sound and shape of complex but delicate and loud transient signals can be altered quite drastically. This is a significant part of the reason why different compressor designs can sound so different from each other, and why one compressor may be preferred in a given situation over another.

Using compression effectively is fairly easy once you get your head around the principles of what it does to your signals, and it’s the simplest way to give your sounds some of that elusive pro punch.Parallel compression is one technique that can help here. It sounds complicated but it’s not – you simply duplicate your drum track (or any other type of track), and then heavily compress the duplicate, leaving the original uncompressed. When you play them back together, you get the powerful ‘breathing’ dynamic sound of the compressed version, whilst still retaining the detail, brightness and clarity of the uncompressed version. The best of both worlds…

Try this with a track and enjoy the result!

The Act of Listening 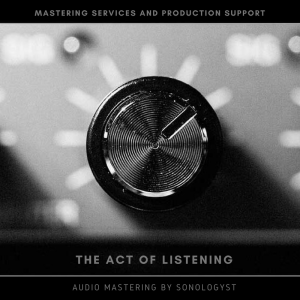 Audio post-production process is a very exciting stage in production wherein a lot of technical knowledge and creativity gets thrown into the project. The whole goal of this part of the production is to come up with tracks of excellent quality and sound professional, all the while communicating the message of the tracks to the listeners.