Reverb is necessary in order to create the impression of distance and separation between elements, but it also contributes a lot to the ‘glamour factor’ you’ll need for a modern commercial production. Quite simply, making the wrong reverb choices is a strong indicator of a non-professional mix. It is potentially so destructive that many of us are either too conservative when we use it – resulting in no real benefit – or else it’s applied too liberally and smears over all your previous delicate mixing manoeuvres.

What follows then are 10 essential tips to help you steer clear of the pitfalls and build a more effective reverb workflow:

A good general piece of advice would be to use short reverbs in busy mixes, longer reverbs in music with more space. What can be deceiving though is to judge the validity of reverbs by name i.e Halls and Chambers as long, plates and rooms as short – if you think you need short reverbs you could find exactly what you want from a short Hall and you could find just the tail your after in a mix using a long plate. Rather than thinking purely in terms of long and short, think in terms of the quality of the tails, longer tails can disguise the presence of reverb where short ones can draw attention to it.

Pre-delay is the single most powerful feature in most reverbs, setting a pre-delay allows for a certain amount of dry signal to get through before it is washed in reverb, this means greater intelligibility. It is particularly useful for keeping the attack of words from a lead vocal upfront and clear. In this sense it is much like how you use a compressor, setting a slower attack time or in the case of reverb – pre delay, lets vocal information through which is re-assuring to listen to. Anything from 20ms to about 80ms will be the area you need to work in – beyond this you will create a distinctive slap back effect that could be cool in the right circumstances but less suitable for most.

For a far more dimensional reverb and richer spaces you should try using multiple reverbs together. For example, using three you can create a much more convincing ambience.
To get you started – first find a small room reverb, this to give a little air around the source, second use a plate reverb and blend it as you might pour sauce into pasta, adding flavour. Third use a hall with a long tail to add ceiling, be careful not to overdo it. How do you know when you’re overdoing it? Read on…

Successful reverb should enhance the mood you are aiming for; it is not just about adding size, but embellishment of your central theme.

It is a taste thing of course, if the reverb is a big feature of your production ala Phil Spector, you’ll use a lot more than if you were just using it to blend, glue and create a believable ambiance. Remember that a little reverb goes a long way. When it comes to applying reverb, solo the instrument or voice, then bring in the reverb until you can hear it, then back it off a smidge until you sort of feel you want a bit more. That’ll probably be about right.

Hopefully you are aware of the benefits of high and low pass filters, and you’ll have been applying these to instruments in your mix already to keep low end rumble and other toxic frequencies at bay. The same wisdom works on reverb, high passing reverb with an EQ – i.e. rolling off its low end will keep the space open. Leaving the low end in, could mean you lose definition as you add more reverb to more channels.

Reverb can be especially useful for brightening vocals where you might feel that EQing the vocal directly is working against you. This same approach can of course be used on any instrument, the trick is to identify the presence EQ range and then boost that in the reverb. For example, vocals usually have a strong presence around 3K, so, rather than EQ the vocal audio, instead, insert an EQ after your reverb and push that in the 3K area to get a more airy, transparent lift.

Snare drums can regularly benefit from gated reverb, whereby a half second or so pre-delay followed then by a reverb that is gated, i.e. cut short abruptly – creates an un-natural, but useful artefact that might be described as smashed glass. The effect if used proportionally and blended well will give dimension to the snare without adding body. Used heavily it is a very distinctive effect brought to popular consciousness by Phil Collins and David Bowie, however, despite how dated it can make a drum sound, it is still used a lot for sound re-enforcement even in today’s most cutting edge productions.

A useful tip for gauging the effectiveness of your reverb, especially if you are using multiple reverbs is to group them together so you can then solo or mute them with a single mouse click. Being able to A/B processing in this way can be very informative and help you reign in your levels or feel confident about adding more. Having control of all your reverbs on a single fader will allow you to fine tune how you want them, plus you can of course apply EQ as mentioned in tips 5 & 6.

We often think of reverb being stereo but there is huge benefit to setting up mono reverbs.

9. Springs and other ‘Dirty’ Verbs

Certain instruments take better to reverb than others, some don’t play so nicely. Often we like electric guitars to feel upfront, but regular reverb tends to soften their impact. Spring reverb and certain other lo-fi processors work especially well, the harshness of them can add body and presence to the audio, don’t discount cheap sounding processors and springs for use on vocals either, for a vintage lo-fi vocal reverb springs are extremely fashionable right now.

We often think of reverb being stereo but there is huge benefit to setting up mono reverbs. Mono reverbs are great for spot lighting or where you want to draw attention to an instrument without swamping the mix. If you wanted to spot light a keyboard solo that was panned off to the right, setting up a mono dedicated processor and then the pan to match the pan setting of the keyboard, will really help retain the dynamics in your production. 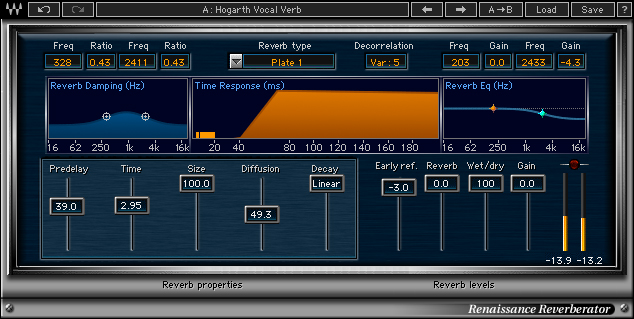 Reverb fashions come and go and presently we seem to be in a phase of rediscovering reverb. Reverb today is generally very musical and subtle: We want it, but we don’t want it to be over bearing. Modern vocal tracks and spot FX will tolerate a good deal, but we like drums to feel natural, textural and upfront. The main thing to keep in mind is that successful reverb should enhance the mood you are aiming for; it is not just about adding size, but embellishment of your central theme.

The Act of Listening

Audio post-production process is a very exciting stage in production wherein a lot of technical knowledge and creativity gets thrown into the project. The whole goal of this part of the production is to come up with tracks of excellent quality and sound professional, all the while communicating the message of the tracks to the listeners.